His Appearance Is Similar to the original Principal Except a Few Changes. He has a light grey shirt, black pants, black shoes and black hair. his eyes are open and seems to be smiling. This game is he's first appearance in the "Baldi's Basics Roblox Games".

He looks similar to the first version. but now his face is distorted and looks like a frown with his legs glitching just like the original prinicpal.

He is one of the many threats that walking around the schoolhouse, He is also known as "Vice Principal" in this game

He is not much of a threat, He is Known as "Vice Principal" just like in Baldi's Basics Pre Update Again 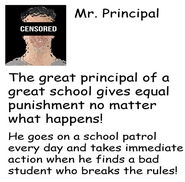 His Popup that appears when your in detention

The Original unedited picture of him(you can see he's bald) 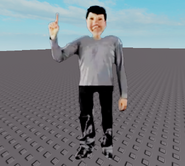