Black
NoobTime is a character in Old Baldi's Basics and other roblox games.

He will sent you a lot of friend requests and tripping you.

He completely redrawn and has 1 arrow on his sign.

He is one of the many threats that walking around the schoolhouse.

Appearances in other games

In Ryanso's Baldi's Basics, NoobTime makes a cameo when Playtime is splashed with Yellow Paint. 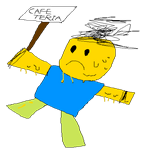 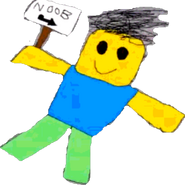