Monstrosity (or known as Monster Baldi) is the main antagonist of Baldi's Return. He makes brief appearances sometimes in other roblox Baldi games.

Jumping (Makes him look like he's hopping as a rabbit)

Monstrosity is just like Baldi but doing a X-pose. Having red eyes and some creepy mouth, Monstrosity remains the almost same as his normal counterpart.

Monster Baldi turned out to be a fan name.

He's made more appearances than Noobtime in roleplay games.

In Baldi's Return, he would follow the player without pausing. If he touched you, you would die.

In ROBLOX Baldi games, he functions the same as Baldi 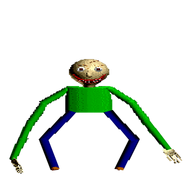