Lets Drum roams Around the Area in the Beta-Version, Unexpectedly After a While, He plays Drums Saying "I Love to Drum!" Repeating 4 Times.

It's shares the same characters from roblox Baldi's Basics, Lets Drum and SuperIntendent are the both edited characters to be needed in roblox.

If you bump into him, he might want you to hear his drums and will mute you for a while! 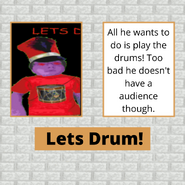 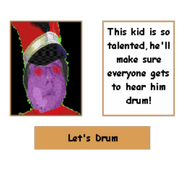 Let's Drum's Description in the Principal's Office in Baldi's Basics Pre Update Again (Maybe-- but it's a pretty good poster for 'em ngl.) 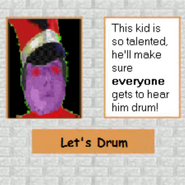