What does this character do?

BB4, Baldi and the Huraina

Jlorb is a main character of BB4 & Baldi and the Huraina.

He appears as a small dithered blue ball with 2 other balls supporting as eyes. He, however, has a 360 view that is not yet imported as a gif.

Jlorb behaves in a way to which he will wander around aimlessly. If in contact with a character, he will say the following; "Oops! Sorry for running into you!" and then later continue floating around. If he catches the player breaking ANY school rule, he will report to every single person. 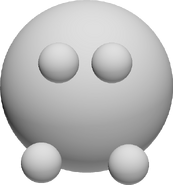 The oldest and earliest picture out there.
Add a photo to this gallery

Retrieved from "https://baldis-basics-roblox.fandom.com/wiki/Jlorb?oldid=12538"
Community content is available under CC-BY-SA unless otherwise noted.