Steals items from the target, Blocks their way.

It's a Wizards Is A Character That Appeared in Old Baldi's Basics and other roblox games. (some of them are scrapped)

He has a round dark grey shaped body and is holding a wizard stick. Also has a Gandalf face with his eyes censored.

Now his eyes are uncensored.

Now his eyes are recensored and his arms, legs and body is black. His stick is now different.

His eyes is are reuncensored.

He is one of the those threats that blocking the halls at the schoolhouse. 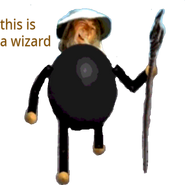 its a wizard in baldi in recreating old stuff