it's a noob is a characters idea made by goleemt koller

steal object from the player 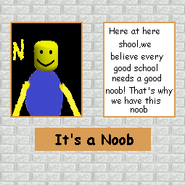 his detention poster
Add a photo to this gallery
Retrieved from "https://baldis-basics-roblox.fandom.com/wiki/It%27s_a_Noob?oldid=8156"
Community content is available under CC-BY-SA unless otherwise noted.