Some kid drew this face and next thing you know it's floating around, laughing and making mischief.

Chalkles is a chalkboard-dwelling character in Baldi's Basics in Education and Learning.

Chalkles appears as a scribbled face drawn in chalk. The circular face appears to have a "mustache", two buck teeth, a button nose, and two eyes. The left eye is bigger than the right.

Chalkles' description from the Principal's Office suggests that they love to cause mischief around Here School.

Chalkles ascends to the ceiling after 3 seconds while following the Player. At that time, the Player will be able to open the classroom door. 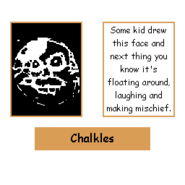 Chalkles' description in the Principal's Office. 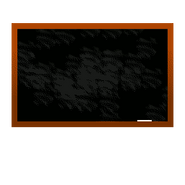 Empty Chalk Board
Add a photo to this gallery

Retrieved from "https://baldis-basics-roblox.fandom.com/wiki/Chalkles?oldid=11588"
Community content is available under CC-BY-SA unless otherwise noted.