Baldi, also known as Professor Baldi, and maybe his possible full name Baldi Baldimore, is the titular main antagonist in Baldi's Basics in Education & Learning. Baldi is the teacher of Here School, giving the Player math problems to solve in the notebooks to collect them. After the player answers the math problems correctly (or incorrectly), the notebook disappears, storing it into the counter from how many notebooks the player obtained, seen on the top left on the heads-up display.

Baldi is a poorly CGI (computer-generated imagery) modeled humanoid figure with long, skinny fingers, a pale body, large red lips and is bald except for what seems to be a singular hair on his head. He also has a long-sleeved green shirt, blue pants, and light brown shoes. 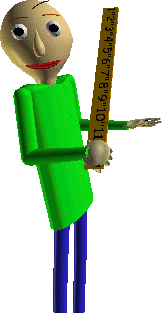 Strangely enough, Baldi's facial expression while chasing the player, while heavily compressed and distorted, is incredibly neutral and not one of anger.

When the player gets their first problem wrong in the You Can Think! Pad™, his face will become distorted, making him appear to be frowning intensely, and his eyebrows will furrow, making an angry expression. He either says "I hear every door you open." or "I get angrier for every problem you get wrong." Before no longer appearing on the bottom left-hand corner of the You Can Think Pad™ for any of the rest of the notebooks. After the Player exits the You Can Think Pad™ after getting their first problem wrong, Baldi begins chasing the player through the Schoolhouse making a smacking sound by hitting a ruler on his hand as he moves slowly or fasts.

Baldi is the main threat in the school. He is the only one in the school that can give the player a game over. Unlike other characters, Baldi's movement is a bit different, only appearing to teleport a short distance towards the player's location every time he makes a “spanking" sound with his ruler.

Baldi puts three problems in all the notebooks which the player must answer correctly. Otherwise, if the player gets an answer wrong, Baldi's spank intervals become shorter, thus making him move more often. At 2 notebooks, he moves at his slowest speed. At notebook 3-5, he slowly gets faster. Once you have 6 notebooks, Baldi will move at the same speed as you, and the only way to outrun him is by running. At 7 notebooks, Baldi is a lot faster and he can catch you even while you're running. The only way to get away from him now is by using a BSoda or if 1st Prize/Gotta Sweep pushes you away from him. Prior to version 1.3, getting 12 questions wrong makes Baldi so fast that he doesn't even have spank intervals. His spank sound will be glitched and sound like his jumpscare/glitched question sound, and no matter what you do, he will eventually catch you. No escape. Good thing, this doesn't happen anymore in version 1.3.

Note: Every notebook (Except the first one) will always end with an unsolvable problem, concluding that every notebook the player collects always makes Baldi's spank intervals shorter resulting in him moving quicker. This happens to the point where he, at the very least, reaches his lowest max speed which would be 7 times his beginning speed after all the notebooks are collected.

As much as Baldi chases the player, he can actually lose track of the player if the player uses one of the distracting items or gets far enough from Baldi. Baldi at this point will have no idea where the player is and will simply go around the school, continuing so until either the player gets back in sight of Baldi or the player opens a door, which Baldi will then be back on track of the player. The player can use WD-NoSquee to bypass the door mechanic to keep Baldi lost a bit longer.

In the end, if at any point Baldi catches the player, Baldi will shift the players view straight to his face, making a very loud startling noise then presenting the player with the game over screen: a black screen along with a random item commonly used in schools (or commonly associated with children) in the middle of the black screen. Afterward, the game will reset back to the main menu. If the player was playing in endless mode, on the black screen there will be text on the bottom informing the player how many notebooks they collected in the end.

As of the 1.3 updates, Baldi's speed mechanic was changed. When Baldi reaches a certain speed he will gradually slow down a bit after a while, making him a bit slower overall and making it possible to find a secret ending which can only be achieved by getting all problems wrong.

Description In The Principal's Office.

Baldi in the phatmojo merch

You Can Think Pad

standing in the birthday bash

i hate this one -imalink100

Congratulations! You found All 7 notebooks! Now, All You Need Do Is GET OUT WHILE YOU STILL CAN!!!!